The working principle of rolling and its processes

Rolling is carryout on a rolling mill and can be performed in two ways; hot and cold process. the rolling mill consists of two more working rollers, supporting rollers, roll stands, drive motor, flywheel, reducing gear, coupling gear etc. The rollers may be plain or grooved depending upon the shape of the product rolled.

Today we’ll be looking at the working of rolling in metalworking and their various processes.

Working principle of the rolling process:

The working of rolling is quite interesting but requires a skillful operator to use it. the process is achieved by stocking metal between some rotating rollers in the opposite direction. The gap between the rollers is smaller than the thickness of the part being worked. The metal is compressed by the rollers while simultaneously shifting it forward due to the friction at the roller interfaces. As soon as the workpiece passes through rollers, the operation is fully done. That is, the thickness of the work decreases while the length and width increases.

Rollers in rolling mills may be plain or grooved depending upon the shape of the rolled product. Metals changes gradually change in shape as soon as it comes in contact with the two rollers.

The video content below contains the working of a rolling machine:

The followings are the processes that can be performed on a rolling machine:

The roll bending process is used to produce a cylindrical shaped product from plate or steel metals.

Roll forming process or roll bending or plate rolling operation is perfect for producing parts with long length or in large quantities. It is a continuous bending process performed by placing a long strip of metal through a consecutive set of rolls which only aid the incremental part of the bend.

Read: Everything you need to know about sheet metals 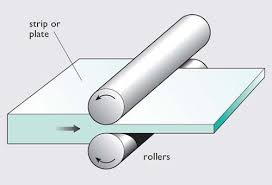 This rolling operation is a specialized type of hot rolling that aid the increment of a ring diameter. The starting material is a thick wall ring and the workpiece is placed between the two rolls known as an inner idler roll and a driven roll. The driven roll presses the ring from the outside. In this rolling process, the wall thickness decreases and the diameter increases as the rolling occurs.

The ring rolling operation is often performed for railway tires, bearings, gears, rockets, turbines, aeroplanes, pressure vessels and pipes. This is because, the resulting grain structure is circumferential, which offers better mechanical properties.

The controlled rolling is thermomechanical processing that integrates controlled deformation and heat treating. The heat treating is achieved from the heat that brings the workpiece above the recrystallization temperature which makes every subsequent heat treating unnecessary. The various heat treating includes the production of fine grain structure; controlling the size, toughness, nature and distribution of various transformation items like the ferrite, pearlite, austenite, bainite, and martensite in steel. As well as inducing precipitation hardening and also toughness controlling.

All these are achieved by monitoring and controlling the entire process at an extreme level. The controlling includes the starting material composition and structure, the temperature of various stages, deformation levels, and cool-down conditions. This process is energy-saving and also offers better mechanical properties.

The forge rolling operation is a longitudinal rolling process that aid the reduction of a cross-sectional area of a heated bar or billet. This is achieved by feeding them between two contrary rotating roll segments. The process is mostly performed to provide optimized material distribution for subsequent die forging processes. This allows a better material utilization, lower process forces as well as the better surface quality of parts which can be attained in die forging processes.

Another option for forgeable metal is to be forge-rolled which is mainly used for long-scaled billets through targeted mass distribution for parts like connecting rods, vehicles axles, crankshafts, steering knuckles.

Some characteristics of forge rolling:

That’s it for this article “working principle of rolling and its  processes”. I hope the knowledge is attained, if so, kindly comment and share.